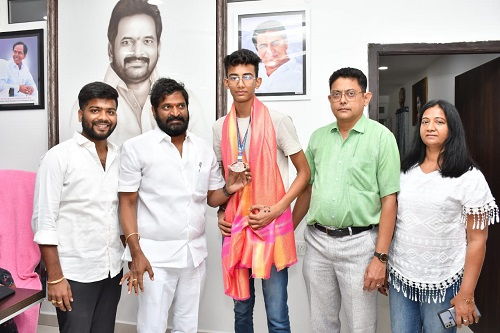 In a press note issued in Hyderabad, Mr.K.Dattatreya, General Secretary of Telangana Cycling Association said, the Minister congratulated the young cyclist and wished him for a better future.  The Cycling Association arranged a rousing reception on Saxena’s arrival in the city. Family members Cycling enthusiasts, numbered in about 200 visited Shamshabad airport when he arrived yesterday.

On behalf of Shahalibanda Cycling Club N Ramesh Babu and other cyclists of the old city also welcomed him for his achievement. He is the first Junior Cyclists of Telangana who secured Bronze Medal in Asian Championship so far. It is a matter of great pride that he achieved such success and remained as only one from Telangana to have that distinction. Hope in future he will bring higher glories to our Telangana state and Country, they said.

He is a promising Cyclist of Our State Telangana and also the first-ever medal winner of the junior category so far, he added.

Being a boy from the Old City of Hyderabad, Ashirwad Saxena has been concentrating on cycling events for the last four years. Indian team coach Sri VN Singh identified his talent during the national championship and selected him to join the Indian Coaching camp. Under his guidance and coaching he achieved this glory to our country and our state, K. Dattatreya added.

A Cyclist from Telangana Aashirwad Saxena secured silver and bronze medals in the National Track Cycling Championship held in the past at Jaipur. The boy has a great future ahead and is a professional cyclist to be watched.

The boy of 16 years and student of 11th standard, Ashirwad Saxena took to professional cycling three years back and has been performing well since then.