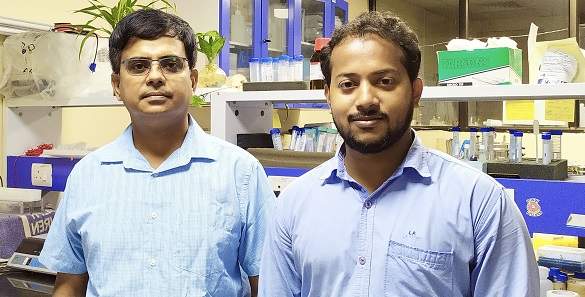 Guwahati,  : Indian Institute of Technology Guwahati researchers have developed a new strategy to deliver chemotherapeutic drugs specifically to the cancerous cells in a patient's body. The path-breaking results of this research have been published in prestigious journals of The Royal Society of Chemistry including ‘Chemical Communications’ and ‘Organic and Biomolecular Chemistry’. The research papers have been co-authored by Prof. Debasis Manna, Department of Chemistry, IIT Guwahati, along with his research scholars Mr. Subhasis Dey, Ms. Anjali Patel, and Mr. Biswa Mohan Prusty, among others. Anticancer activities were carried out in collaboration with Prof. Siddhartha Sankar Ghosh and Ms. Plaboni Sen from the Indian Institute of Technology Guwahati and Prof. Arindam Bhattacharyya and Mr. Soumya Chatterjee from Calcutta University.

A part of the ongoing research was recently highlighted as the cover page of Chemical Communications.

The problem with existing chemotherapeutic drugs is that they kill healthy cells of the body in addition to cancerous cells, leading to numerous undesirable side effects. In fact, it is believed that cancer deaths are as much due to the side effects of chemotherapy as the disease itself. There is worldwide research to overcome the drawbacks of secondary toxicity of chemotherapeutic drugs. Some strategies that are being explored include target-specific delivery of the drugs and on-demand delivery of appropriate drug doses to cancerous cells/tissues.

Explaining his research Prof. Debasis Manna, Department of Chemistry, IIT Guwahati, said, “We have two needs in the development of chemotherapy drugs – the drug must be targeted at the cancer cells, the drug must be released by an external trigger whenever it is required,”

To meet the above needs, the molecule developed by the research team has four special features.

Thus, the molecules developed by the IIT-G researchers self-assemble as capsules to hold the drug, which then attaches only to cancer cells. When infrared light is shone on it, the shell breaks and releases the encapsulated drug into the cancerous cell. The IIT-G scientists rightly believe that their approach would allow the development of drug carriers for chemotherapy with enhanced efficacy and negligible side effects.

The societal impacts of this work cannot be overstated. Given that the number of cancer patients in India is anticipated to be 30 million by 2025, the development of effective chemotherapeutic drugs and delivery systems is critical. The researchers believe that the development of target-specific, light-responsive, self-imaging macrocyclic lipids such as those they’ve developed could help in image-guided chemotherapeutic applications.

Following the development of the targeted IR (light)-trigger drug release system, the IIT Guwahati researchers are preparing to perform in vivo studies to take this understanding closer to drug development.