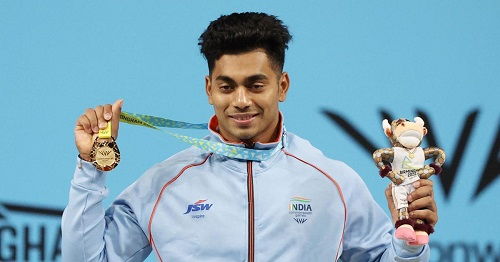 New Delhi: Indian youngster and weightlifter Achinta Sheuli has made the entire country proud as he has bagged a gold medal in the ongoing Commonwealth Games which is being hosted by Birmingham, England. The 20-year-old Indian athlete who is participating in the multi-nation sporting event for the first time has achieved this feat while competing in the 73kg category.

This is India's third gold medal in the ongoing games.

Before this golden girl, Mirabai Chanu achieved the same feat in the 49kg event. 19-year-old Jeremy Lalrinnunga who was competing in the 67kg category also won the gold medal as he lifted a total of 300kg across Snatch and Clean & Jerk. A resident of West Bengal, Sheuli registered a new Commonwealth Games record as he lifted a total of 313kgs. Sheuli snatched a total of 143 kgs which is a CWG record.

Sheuli in his first attempt in the snatch round lifted a mammoth weight of 137kg. In each of the next two attempts, Achinta lifted 140 kgs, taking his tally to 280. When combined the 20-year-old Indian athlete lifted a total of 313kg. With this, the record weight in the 67kgs category belongs to Achinta Sheuli. He raced ahead of his contemporaries and clinched the third gold medal for India.

"I am extremely happy and honored, I have had my fair share of struggles in life and to be standing here today and making the country proud is something that I have always dreamt of. This medal is just not mine, I'd like to dedicate this honor to my brother, my family, and my coach. I now look forward to the Olympic games and I hope that I can replicate my performance", said Sheuli.

In a tweet, the Prime Minister Narendra Modi congratulated Achinta Sheuli, "Delighted that the talented Achinta Sheuli has won a Gold Medal at the Commonwealth Games. He is known for his calm nature and tenacity. He has worked very hard for this special achievement. My best wishes to him for his future endeavors."

"Before our contingent left for the Commonwealth Games, I had interacted with Achinta Sheuli. We had discussed the support he received from his mother and brother. I also hope he gets time to watch a film now that a medal has been won,” he added.