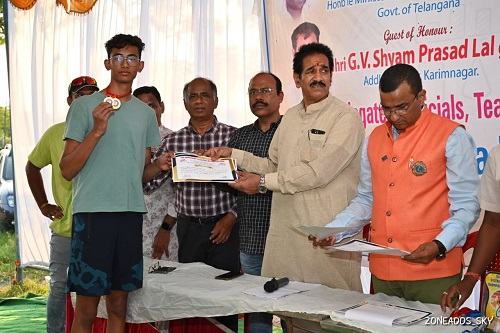 It was organised by Alphores Education Academy under Karimnagar District Cycling Association.  A hundred and thirty (130) cyclists participated in this from all over the Telangana State. Ashirwad Saxena who is a junior bronze medalist of the Asian Junior cycling Championship proved his mettle by winning two medals. He secured 2 Gold Medals in Boys 18 yrs & under 23 yrs in Road Events (Ind Time Trial of Boys 18yrs & 105 km Mass Start of under 23 yrs category). He has also won recognition as the most promising cyclist in Hyderabad District.

Hyderabadi Cyclist Ashirwad Saxena was among six cyclists who was part of the Junior Cycling Track Team chosen to participate in the UCI Junior World Track Cycling Championship held in Tel Aviv recently. He is also Telangana's first Junior Cyclist to win a Bronze Medal in Asian Championships.

Responding to his good performance, Ashirwad Saxena said Cycling has a great history in our state.  Telangana has produced many Cyclists of international repute. Cycling had a glorious past in our city.  Events like   7th Inter District Road Cycling Championship-2022 add to the ecosystem.  I would like to revive the good old passion of cycling in the city.  I will participate in every possible event to popularize the sport.

The overall performance of the Maxwell Trevor Cycling Welfare Association of Hyderabad was good.  All the cyclists of Hyderabad were dominated in this championship and also selected probables for the upcoming National Road Cycling Championship.