The upcoming edition of the Khelo India Youth Games will feature a total of 27 disciplines; water sports being included for the first time in the history of the games. 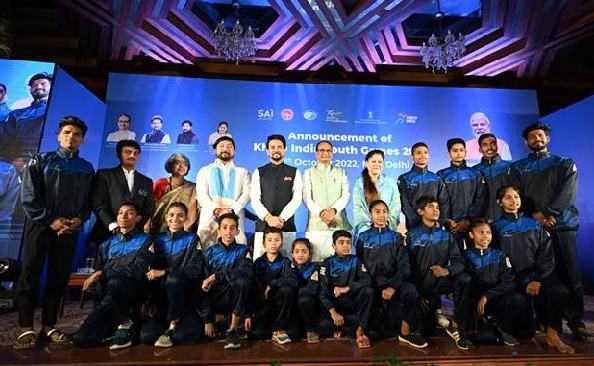 New Delhi. : The upcoming edition of the Khelo India Youth Games will be held in Madhya Pradesh. The announcement to this effect was  made by the Union of Minister of Youth Affairs and Sports, Shri Anurag Singh Thakur, in the presence of Chief Minister of Madhya Pradesh, Shri Shivraj Singh Chouhan in the national capital today. The sports competition is scheduled to start on 31st January 31, 2023 and end on 11th February,2023.

Shri Shivraj Singh Chouhan, addressing the gathering said, “I thank the Prime Minister  for giving Madhya Pradesh the chance to host the Khelo India Youth Games. We promise to make it the most special Khelo India Games ever and host it keeping in mind our philosophy of ‘Atithi Devo Bhava’.

“We have world class sports stadiums in Madhya Pradesh like the shooting and water sports academies. Many other facilities are also coming up. With the growing development in infrastructure and with the privilege of getting to host Khelo India Youth Games, I am certain a sports revolution will take place in Madhya Pradesh,” the CM of Madhya Pradesh added.

Mentioning that the indigenous games will once again be a part of the upcoming KIYG, Shri Anurag Singh Thakur said, “It was PM’s vision to support Olympic sports and indigenous sports in the same manner. I thank Madhya Pradesh who have made the sport of Mallakhamb their state sport.”

“Sports is a State subject. I am happy States like MP are coming forward to do their part in building our sports ecosystem. All the States should learn from it and understand that we have to contribute as a whole to develop sports from the district level to the State level and so on,” the Union Minister added.  He appreciated the role of sporting events like Khel Mahakumbh and Chief Minister’s  Cup(Madhya Pradesh)  in promoting sports at the grassroot level.  Shri Anurag Singh Thakur reiterated that the Khelo India Youth Games have promoted sports and sportspersons in the country. It is for this reason that 12 national records were broken at the last Khelo India Youth Games held in Haryana, he said.

Extending his best wishes, Shri Nisith Pramanik added, “The Madhya Pradesh Govt have done everything possible to support athletes over the years. Every State should take an example how PM’s vision to help athletes reach their pinnacle is taking shape. I am sure this upcoming Khelo India Youth Games in the ‘land of Mahakal’ will be the most special ever.”

Smt. Yashodhara Raje said that the government has done the work of creating a positive environment for sports in India. Indian players are performing well in sports across the world. Especially our daughters are continuously increasing India's pride in sports by winning medals, she said.

The upcoming edition of the Khelo India Youth Games will feature a total of 27 disciplines; water sports being included for the first time in the history of the games. New disciplines like Canoe Slalom, Kayaking, Canoeing and Rowing will also feature alongside the usual sports and the indigenous games. The Games will take place across eight cities of Madhya Pradesh - Bhopal, Indore, Ujjain, Gwalior, Jabalpur, Mandla, Khargone (Maheshwar) and Balaghat.