Hyderabadi Cyclist Ashirwad Saxena among six other cyclists part of the Junior Cycling Track Team chosen to participate in the UCI Junior World Track Cycling Championship to be held in Tel Aviv. 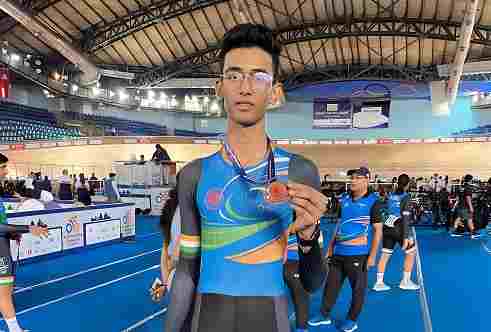 Ashirwad Saxena is Hyderabad's  Asian Bronze Medalist  in 28th Junior Asian Track Cycling Championships held a few months back in Delhi. He is a promising rider with a future full of promises.

The team has just left for Tel Aviv.

The Development Officer, TOPS Division of Sports Authority India in a communication to the Secretary General, Cycling Federation of India informed that Government has approved the participation of Junior Cycling Team(Men) consisting of 7 cyclists and three coach and support team.

The UCI 2022 Junior Track World Championships will be held in Tel Aviv in Israel from August 23 to 27.

This is for the first time ever from August 23 to August 27, 2022 it is being held in Israel. The competition will take place at the Sylvan Adams National Velodrome in the sporting capital of Israel, Tel Aviv. This is the 47th edition of the U-18 championships.

The UCI Junior Track Cycling World Championships are a set of world championship events for junior riders, for various disciplines and distances in track cycling and are regulated by the Union Cycliste Internationale (UCI).

Championships are open to riders selected by their respective national cycling associations. They compete in the colours of their country.

The Union Cycliste Internationale is the world governing body for sports cycling and oversees international competitive cycling events. The UCI is based in Aigle, Switzerland.