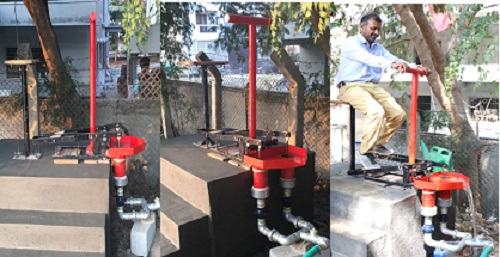 The technologies include Ground Water Level Measuring Device and Ergonomically Designed Treadle Pump, which are the improved versions over the practices followed by the rural people in Rajasthan and Uttar Pradesh, respectively.

RuTAG at IIT Delhi was set-up in 2009 and has been working on several demand-driven technologies to reduce the drudgeries of the villagers and improve the performances.

The groundwater level measurement device developed by RuTAGIIT Delhi is used to measure the groundwater table in monitoring wells.The device consists of a robust rust-resistant stainless-steel probe connected to a high-tension coaxial cable. The cable is then connected to an electronic circuit containing a battery, an LED lamp, and a buzzer.

During the operation, the probe is lowered into the well, and as it comes in contact with water, the circuit is completed, the buzzer beep, and the LED glows. The operator can then get the depth using the markings on the cord. The salient features of the device include portability, compliance with IS 15896:2011, high operational stability, and accurate measurements.

Treadle pump is a mechanical device, which uses human power to draw water from the ground. It is a twin-cylinder reciprocating water pump presently being used by poor/marginal farmers in various places for irrigation purposes. These are particularly popular in areas where the water level is not too low (around 10 m or less). RuTAGIIT Delhi treadle pump is made using handpump and plumbing parts, making it easier for farmers in rural areas to obtain spare parts.

The pump consists of two piston-cylinder assemblies, a delivery channel, inlet pipes, treadles, a handle, and an adjustable seat. The foot pedals on the treadles can be adjusted based on the user's comfort level. An average person can draw water at a rate of 3500 to 4000 litres per hour. The treadle pump parts are made of mild steel, and the estimated life of the pump is around 10 to 15 years.

While speaking about the transfer of the technologies to the Aftrican nations, Prof S.K. Saha, Coordinationar, RuTAG, IIT Delhi, said, “It is a proud moment for RuTAGIIT Delhi to go global. More importanty, such knowledge sharing that would benefit the major percentage of the World population is a great satisfaction as a technologist. IIT Delhi is committed to expand and support such knowledge sharing in the days to come”.

Along with IIT Delhi, there are RuTAGcenters atIITBombay, IIT Guwahati, IIT Kanpur, IIT Kharagpur, IIT Madras, and IITRoorkee also. They together published a compendium of 50+ technologies, which are ready to go to the field and conducted three international conferences on Rural Technology Development and Delivery (RTDD) at IIT Delhi, Madras, and Jodhpur in the years 2018, 2020, and 2022, respectively.

Through RTDD,RuTAGs propagate the philosophy of "Researchizing Rural Problems," while the projects in the centers connect the young engineering minds with the society.