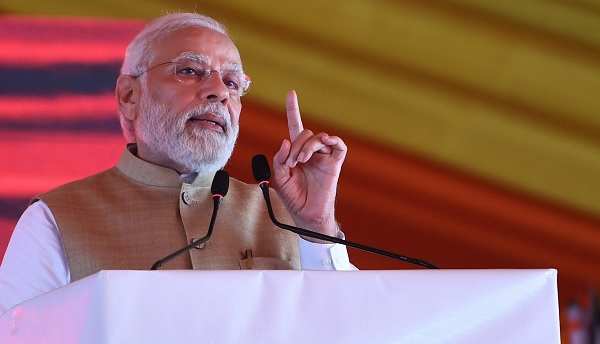 New Delhi. : The Prime Minister,Narendra Modi distributed about 71,000 appointment letters to newly inducted recruits under Rozgar Mela via video conferencing today. The Rozgar Mela is expected to act as a catalyst in furthering employment generation and providing meaningful opportunities to the youth for their empowerment as well as direct participation in national development. Earlier in October, 75,000 appointment letters were handed over to newly inducted appointees under Rozgar Mela.

Addressing the gathering, the Prime Minister said that more than 71,000 youth are being given appointment letters in more than 45 cities in India which will result in a new era of happiness for so many families. He recalled that on the day of Dhanteras, the central government had distributed 75,000 appointment letters to the youth. “The Rozgar Mela of today is proof that the central government is working in mission mode to provide employment opportunities to the youth of the country”, the Prime Minister said.

Recalling the initiation of the Rozgar Mela a month ago, the Prime Minister remarked that several Union Territories and states will keep on organising such Rozgar Melas from time to time. He expressed delight that thousands of youth were provided appointment letters in Maharashtra, Gujarat, Uttar Pradesh, Jammu & Kashmir, Ladakh, Andaman and Nicobar, Lakshadweep, Daman and Diu, Dadra and Nagar Haveli and Chandigarh by the respective governments. He further added that Goa and Tripura are also organising similar Rozgar Melas in a few days' time. The Prime Minister credited the double-engine government for this tremendous feat and assured that such employment fairs will be organised from time to time to empower the youth of India.

The Prime Minister said that the youth is the biggest strength of the nation. The central government is according the highest priority to utilise their talent and energy for nation-building. He welcomed and complimented the new public servants. He reminded them that they are assuming this important responsibility in a very special time period, i.e. Amrit Kaal. He highlighted their role in the country’s resolve to be a developed nation in the Amrit Kaal. He asked them, as representatives of the central government, that they should understand their role and duties comprehensively and should constantly focus on capacity-building to perform their duties.

Throwing light on the Karmayogi Bharat technology platform that is launched today, the Prime Minister informed the availability of many online courses for government officials. He emphasised a special course designed for government employees called Karamyogi Prarambh and urged the new appointees to make the most out of it. Citing its benefits, the Prime Minister said that it will be a great source for their skill development as well as benefit them in the days to come.

The Prime Minister touched upon the crisis created for the youth at the global level due to the pandemic and the war. He said in this difficult time also experts around the world are optimistic about India's growth trajectory The Prime Minister said, as per the experts, India has become a major force in the service sector and soon it will be the manufacturing hub of the world too. While initiatives like PLI, the Prime Minister said, will play a huge role in this, the main foundation will be the youth and the skilled manpower of the country. The PLI scheme is likely to create 60 lakh jobs, the Prime Minister informed. Campaigns, like Make in India, Vocal for local, and taking local, global, are creating new opportunities for employment and self-employment, he added. “Possibility of new jobs in both the government and private sector is continuously increasing. More, importantly, these opportunities are emerging for the youth in their own cities and villages. This has reduced the compulsion of migration for the youth and they are able to play their role in the development of their area”, he said.

The Prime Minister highlighted the new opportunities created by measures in sectors ranging from startup to self-employment and space to drone. 80,000 startups are providing the youth opportunity to showcase their talent. Drones are being increasingly used in medicine, pesticide, and mapping in the Svamitva scheme and in the defence sector. This is creating new jobs for the youth, he said. Remembering the launch of India’s first space rocket by the private sector in India a few days ago, the Prime Minister lauded the decision to open up the space sector thereby creating employment opportunities for India’s youth. He also gave the example of 35 crores plus Mudra loans that have been sanctioned. The Prime Minister credited the forward push towards research and innovation and pointed out that it resulted in increased employment opportunities in the country.

The Prime Minister urged the appointees to make the most of the new opportunities that are presented to them. He highlighted that these appointment letters are only the entry point that opens up a world of growth for them and urged them to become deserving candidates by learning from experience and from their seniors. The Prime Minister concluded by sharing his experience of learning and said that one should never let the student within the soul perish. Shri Modi remarked that he never lets go of a chance to learn something new. The Prime Minister asked the appointees to share their experience of online training and provide constructive feedback to improve the Karmayogi Bharat platform. “We are already on our way to turning India into a developed country. Let’s take the resolve to move forward with this vision”, the Prime Minister concluded

The Rozgar Mela is a step towards the fulfilment of the Prime Minister’s commitment to accord the highest priority to employment generation. The Rozgar Mela is expected to act as a catalyst in furthering employment generation and providing meaningful opportunities to the youth for their empowerment as well as direct participation in national development. Earlier in October, 75,000 appointment letters were handed over to newly inducted appointees under Rozgar Mela.

The physical copies of the appointment letters to the new appointees will be handed over at 45 locations across the country (except Gujarat and Himachal Pradesh). In addition to the categories of posts filled earlier, posts of teachers, lecturers, nurses, nursing officers, doctors, pharmacists, radiographers and other technical and paramedical posts are also being filled. A significant number of posts are being filled by the Ministry of Home Affairs in various Central Armed Police Forces (CAPF).
The Prime Minister also launched the Karmayogi Prarambh module. The module is an online orientation course for all new appointees in various Government departments. It will include a code of conduct for Government servants, workplace ethics & integrity, human resource policies and other benefits and allowances that will help them to get acclimatized to the policies and transition smoothly into the new roles. They will also get an opportunity to explore other courses on igotkarmayogi.gov.in platform to enhance their knowledge, skills and competencies.

Rozgar Mela is our endeavour to empower youth and make them the catalyst in national development. https://t.co/BKXBxO6NfX