:- Shri Arjun Munda, Hon'ble Minister for Tribal Affairs, Government of India was the Chief Guest of the function 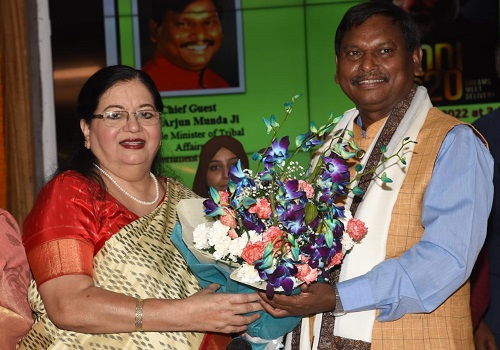 The Vice Chancellor in her address said "in the past Jamia has had the fortune of being nurtured by the noble souls like Mahatma Gandhi. And in the present, it has been blessed with the generous and continuous support of our visionary and proactive Prime Minister, Shri Narendra Modi Ji, whose transformative leadership has enabled us to reaffirm our creative engagement. Jamia owes a great deal to our Honourable Prime Minister for its exponential growth and its achievements, figuring among three topmost universities of our nation".

In his address Shri Arjun Munda said that Hon'ble Prime Minister Shri Narendra Modi has developed a thought in people to look at things differently. His conceptualization and understanding of issues is very much clear and different from others. He patiently listens to his team members, gives clear directions for implementation and looks at every issue with national & international interest.

Shri Indresh Kumar in his address mentioned how Hon'ble Prime Minister Shri Narendra Modi is trying to bring minorities to the mainstream and that is why the government has launched a number of schemes for them. He also spoke about India's pluralistic culture and unity. He focused on the points how every citizen of the country can contribute towards the nation building while maintaining their individual identities.

The eminent speakers threw ample light on every aspect of the book that attempts to underscore Hon'ble Prime Minister's personality, motto and his vision of 'Sabka Saath, Sabka Vikas aur Sabka Vishwas' .

The seminar ended with National Anthem.