:- The student was identified as Naveen from Karnataka's Haveri 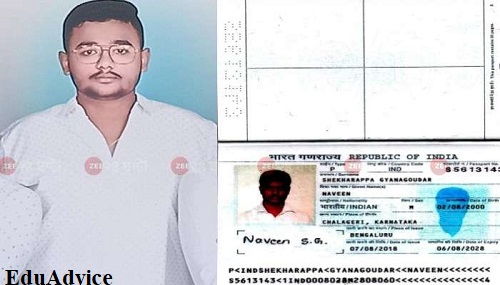 New Delhi. : An Indian student has died in Russian shelling in Kharkiv this morning, the Ministry of External Affairs said today. The student was identified as Naveen from Karnataka's Haveri.

“With profound sorrow we confirm that an Indian student lost his life in shelling in Kharkiv this morning. The Ministry is in touch with his family. We convey our deepest condolences to the family.” Further, Bagchi wrote: "Foreign Secretary is calling in Ambassadors of Russia and Ukraine to reiterate our demand for urgent safe passage for Indian nationals who are still in Kharkiv and cities in other conflict zones. Similar action is also being undertaken by our Ambassadors in Russia and Ukraine."

Congress leader Shashi Tharoor said, "This is an awful tragedy. My heart goes out to the family of the victim and the anxious families of all those still stuck in Ukraine. We must do everything possible to get them home."

Karnataka Chief Minister Basavaraj Bommai called up Naveen's family and offered condolences. He consoled the family and told them the government was doing everything to get the body back.

On Monday, the Centre decided to send four Union ministers to Ukraine's neighbouring countries to personally oversee and coordinate the evacuation exercise.

The Indian government launched Operation Ganga to rescue Indian citizens, mostly students, from Ukraine, which was invaded by Russia six days ago. So far, 1,396 Indian nationals have been brought back from Ukraine in six evacuation flights.