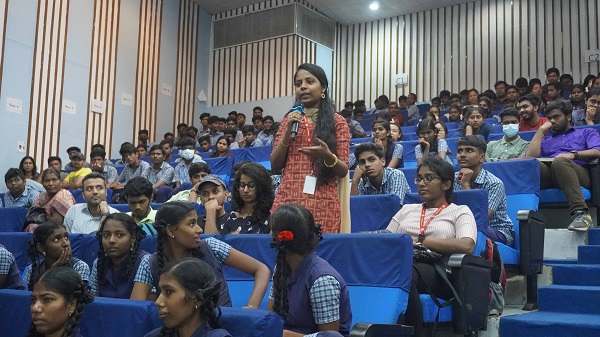 Shri Narendra Modi, Hon’ble Prime Minister of India, initiated the G20 University Connect, which is being jointly organized by the Ministry of External Affairs, Government of India, and Research and Information System for Developing Countries (RIS), a New Delhi–based autonomous policy research institute. The objective is to engage with students from 75 universities around 56 locations across India.

Addressing the gathering of school students and research scholars at IIT Madras campus today, Dr. Seshadri Chari, Member, Governing Board and Governing Council, RIS, said, “India’s outlook has always been that everybody should benefit from advancements rather than hoard knowledge. Even during the Coronavirus pandemic, India developed vaccines, part of which were given to the outside world. Any country which wanted vaccines, the country gave it to them and to some of the countries, even free of cost. We are keen on developing technology in keeping with the tendency of looking at the outside as part and parcel of ourselves.”

Further, Dr. Seshadri Chari said, “We have got problems because of Climate Change, the world is heating up leading to icebergs melting and sea levels rising, submerging countries with large coasts. In such circumstances, India’s approach of developing technology with the approach of treating the whole world as one is important. This attitude is what represents India.”

Dr. Seshadri Chari added, “G20 has a message to the World. We have to grow together as the problems we face pose problems for all. India’s message to the world is ‘One earth, One family, One future’.”

Speaking on occasion, Prof. Prathap Haridoss, Dean (Academic Courses), IIT Madras, said, “Anytime you see any news about India anywhere, we are all contributing to it in different ways. When India grows, it is because of all your (students) contribution. This event is to create awareness about G20 and what it means for India to lead the G20 this year. India has many unique features such as a diverse population.”

The intended purpose of this marathon of lectures across the nation is to engage with the youth in the G20 process and sensitise them to the deliberations during the Indian presidency and the impact it bears for them. The University connect series will be executed in the form of Lectures, Mock G20 and other interactive activities enabling students to engage and be involved in the G20 process.

Delivering special remarks, Prof. A Subramanyam Raju, Dean (International Relations), Pondicherry University, said, “India is a consultative society. We have differences but we always grow together...There is a trust deficiency in the world. India has the ability to navigate the trust between the States. This is our strength. Also, we look for multilateral engagements, which is key for safety, security and prosperity. India is also among the fastest-growing economy that is rising peacefully and is not preventing any other countries from growing.”

Prof. Subash S, Faculty, Department of Humanities and Social Sciences, IIT Madras, added, “What is interesting about the last 20 to 30 years is the rise of Asia. The Asian economy has become the challengers to the Western Economies, especially the European Countries and the U.S. The G20 are the countries that can influence global issues. G20 countries together represent 80% of global GDP, 75% of global trade and 60% of the world’s population. They can influence global architecture.”

The University of Kerala, MCU in Bhopal, and Panjab University have participated in this on-campus activity attended by their students interacting with subject experts and former diplomats spreading awareness on the G20 India Presidency.

Prof. Subash added, “This is a group of nations who come together informally every year. The organization meets in a member country once every year. This year’s meeting will be in India. Countries in the global South will be the heading the G20 in the next few years. The Ambit of G20 has moved on from looking only at financial issues to other issues as well including the global issue of climate change. A key issue is to discuss taxation of multinational companies located in tax havens.”

Prof. Vignesh Muthuvijayan, Department of Biotechnology, IIT Madras, delivered the vote of thanks.