:- A bright student from the start, Vittal had always dreamed of becoming a researcher and the recent rank further motivates him and adds to his achievement list 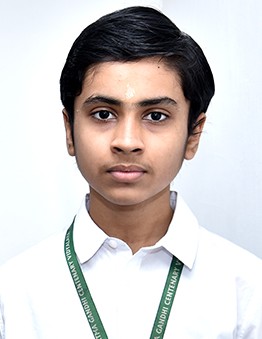 Tiruchirappalli: Vittal Rao L, a 16-year-old boy from Tiruchirappalli, Tamil Nadu has made his parents proud by securing a National Rank of 777 in the Kishore Vaigyanik Protsahan Yojana Examination (KVPY) a prestigious National Program of Fellowship in Basic Sciences, funded by the Department of Science and Technology, Government of India. A bright student from the start, Vittal had always dreamed of becoming a researcher and the recent rank further motivates him and adds to his achievement list.

Vittal attempted the exam when he was in class 11 in the Stream SA category. Currently a student of Santhanam Vidyalaya Senior Secondary School in Tiruchirappalli, he hopes to pursue an undergraduate programme in pure sciences at the prestigious Indian Institute of Science in Bangalore (IISc) and aims to take up a career in advanced research sectors in this field.

With his mother’s push, he joined BYJU’S, a decision that allowed him access to top-notch study material and the right training required to prepare. Furthermore, he took two mock tests administered by BYJU'S, and the accuracy of BYJU'S test score and analysis provided him with a quick understanding of his strengths and weaknesses, helping him to focus his attention effectively.

Speaking on his achievement results, Vittal’s mother Prasanna L said, “He has always been a diligent student and with BYJU’S he could strengthen his preparation for not only the KVPY Aptitude test but also his larger goal of cracking JEE.  He wants to pursue research and clear the entrance for the Indian Institute of Science and BYJU’S has really provided him with relevant content and most importantly brilliant guidance in the form of helpful teachers who are helping him tremendously in moving closer to his goal. I feel proud of him and elated with the decision of enrolling him with BYJU’S.”

Expressing joy on Vittal’s achievement, BYJU’S Spokesperson, said “We at BYJU’S feel proud to witness stories of hard work and sheer dedication like that of Vittal. Our personalized learning programs are designed to support each student in their learning journey and empower them to achieve their goals and Vittal is a testament to that. Stories like his keep motivating us to innovate and bring in newer offerings on board, and I extend my heartiest congratulations to him and his mother for their collective efforts and for trusting us in his academic journey.”